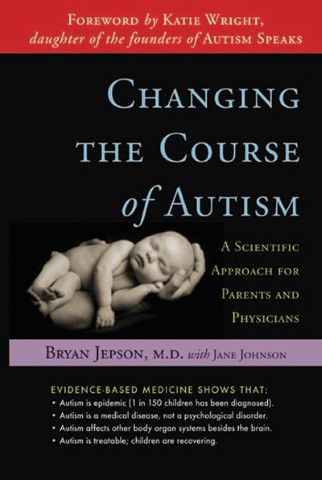 Changing the Course of Autism

A Scientific Approach for Parents and Physicians

This book has the potential to revolutionize the way autism is perceived and managed. It shows that the disease can be treated by reducing the neurological inflammation in the process of the disease.

Foreword by Katie Wright, daughter of the founders of Autism Speaks

A once rare disease, autism is now a worldwide epidemic affecting 1.8 million American children, making it the most common developmental disability—more common than Down syndrome, cerebral palsy, and mental retardation combined. Autism is growing at a startling rate of 10-17 percent per year. At this rate, the prevalence of autism could reach 4 million Americans in the next decade. The Center for Disease Control just released studies showing that at present, 1 in 150 children in the U. S. have been diagnosed with the disease.

Changing the Course of Autism has the potential to revolutionize the way autism is perceived and managed. Most books on this subject describe educational and behavioral therapies, but autism is a medical disease, not a psychological disorder. This groundbreaking books shows that the disease can be treated by reducing the neurological inflammation that is part of the disease process, rather than simply masking the symptoms with drugs like Ritalin and Prozac. The authors have seen autistic behaviors improve dramatically or disappear completely with appropriate medical treatment. The book reviews the medical literature regarding the biological nature of the disease, including the potential connection between vaccines and autism.

This book builds a bridge between the medical profession and parents who are angry at the rise in this disease and the way it is treated. It is the only book on this subject written by an M.D. who is also the parent of an autistic child.

In 2001, the second son of Bryan Jepson, M.D. was diagnosed with autism. Over the course of that year, he and his wife, Laurie, began exploring treatment options and found that the medical community knew very little about the cause, the treatment, or the prognosis of this disease. After a year of research, the couple established the non-profit Children’s Biomedical Center of Utah. There, autistic children could receive the most up-to-date care available. From 2002-2005, Dr. Jepson treated hundreds of children on the autism spectrum, and the clinic raised awareness throughout the inter-mountain West concerning issues related to autism and other childhood developmental disorders.

Because he was a leading specialist in the field, Dr. Jepson was recruited to join the team at Thoughtful House Center for Children (www.thoughtfulhouse.org), a multidisciplinary clinic dedicated to caring for children with autism and related conditions. The Thoughtful House is designed to integrate biomedical, gastrointestinal, and educational intervention into a coordinated effort and to use this model to perform clinical research. It officially opened January 1st, 2006, and Dr. Jepson is now its Medical Director.

Dr. Jepson graduated from the University of Utah Medical School in 1995 and completed residency training in Grand Rapids , Michigan in 1998. Board certified in emergency medicine, he lives in Austin, Texas, with Laurie and their two sons.

Jane Johnson became interested in medical treatment for learning disabilities in 2000 when her son was diagnosed with non-verbal learning disorder (NLD). In her effort to educate herself, she became more and more alarmed at the epidemic growth and prevalence of developmental disorders. She is the Co-Managing Director of the Board of Thoughtful House. She lives in New York City with her husband and their three children.

The foreword is by Katie Wright, whose parents, Bob and Suzanne Wright, founded Autism Speaks after Katie’s son was diagnosed with autism. As CEO of NBC/Universal, Bob made Autism Speaks the biggest autism organization in the country, and Katie and her parents have worked tirelessly to raise autism awareness.

Praise for Changing the Course of Autism

Changing the Course of Autism is well written, balanced, and persuasive. Prompted by a recent barrage of public service announcements sponsored by Autism Speaks, in late July I headed to the local Barnes & Noble to locate the "best argument" I could find in the current autism / vaccination debate. Of all the options, I found this book to be the most promising. I freely admit that I was (both by nature and by training) skeptical of many of the claims that I had heard.

During my military service, I personally administered hundreds of vaccinations -- and oversaw the administration of more than 10,000 doses of a wide array of vaccines including yellow fever, typhoid, Japanese encephalitis, plague, etc. My first child (now 14 years old) received every scheduled vaccination on time. Although firmly in the "vaccinate early and often" camp, I have always tried to remain open minded and objective.

I read chapters 1 through 14 of the book. (The treatment portion of the text has no immediate relevance for me at this time.) My wife and I discussed many of the passages at length. I pursued independent confirmation of several specific issues, including the alleged "retraction" of Dr. Wakefield's 1998 Lancet article. I found the treatment of the issues to be scholarly, readable, and even-handed.

Why did I take such a keen interest in this book? My second child was born in June. Until such time as I have exhaustively reviewed the available data for each recommended vaccine, her schedule will be on hold.

To date, I have purchased 15 copies of Changing the Course of Autism. Two copies will be going to my daughter's pediatricians at her two month visit. One copy has already gone to the mother of an autistic patient (with chronic diarrhea and "failure to thrive") I saw last week. The rest of the copies will be going to the dozen or so co-workers of mine who are new parents. I plan on making more bulk purchases in the future to distribute to fellow physicians, local libraries, etc.

This book will be the new PDR of autism for parents and physicians. Incredibly well referenced and easy to understand, it challenges long-held beliefs about this disease and introduces us to the new medical model of autism. An important book that every professional and family member who deals with autism must own.

Dr. Bryan Jepson demystifies the disorder by providing the most up-to-date information on symptoms, detection, diagnosis, treatment, and the impact of the disorder on families of individuals with autism. Based on Dr. Jepson's extensive research and clinical observations, this book answers myriad questions about autism with authority and compassion.