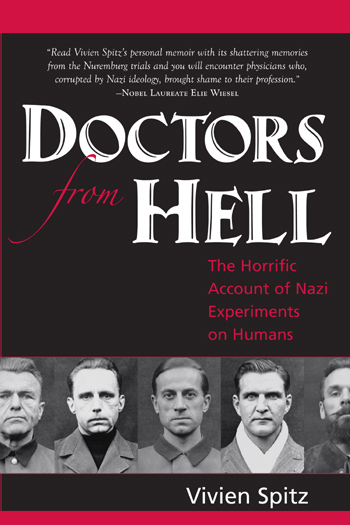 Doctors from Hell is a chilling story of human depravity and ultimate justice, told for the first time by an eyewitness court reporter for the Nuremberg war crimes trial of Nazi doctors.

Doctors from Hell is a chilling story of human depravity and ultimate justice, told for the first time by an eyewitness court reporter for the Nuremberg war crimes trial of Nazi doctors. This is the account of 23 men torturing and killing by experiment in the name of scientific research and patriotism. Doctors from Hell includes trial transcripts that have not been easily available to the general public and previously unpublished photographs used as evidence in the trial.

The author describes the experience of being in bombed-out, dangerous, post-war Nuremberg, where she lived for two years while working on the trial. Once, a Nazi sympathizer tossed bombs into the dining room of the hotel where she lived moments before she arrived for dinner. She takes us into the courtroom to hear the dramatic testimony and see the reactions of the defendants to the proceedings. This landmark trial resulted in the establishment of the Nuremberg code, which sets the guidelines for medical research involving human beings. A significant addition to the literature on World War II and the Holocaust, medical ethics, human rights, and the barbaric depths to which human beings can descend.

Vivien Spitz, the youngest court reporter at the Nuremberg Trials, gave more than 500 speeches on the lessons of the Holocaust to schools, churches, synagogues, and professional groups internationally. She was honored numerous times for her work, including commendations from Bill Clinton, Al Gore, US Senator Christopher Dodd, and the state of Israel. She was the first woman to report on the U.S. Senate floor and took down the words of four presidents. She died in 2014.

Doctors from Hell has been translated into six languages.

Praise for Doctors from Hell

In this personal account of her service in the Nuremberg War Crimes Trials, Vivien Spitz continues to contribute to the cause of human rights.

I am proud to pay special tribute to Vivien Spitz as she receives the first NCRA Humanitarian Award in recognition of her service as a court reporter during the Nuremberg War Crimes Trials and her dedicated efforts to promote Holocaust remembrance.

You are to be commended for your work in recording more than 300,000 pages of testimony during the Nuremberg War Crimes Trials, and I want to salute you for your outstanding dedication and tremendous commitment to educating your colleagues and peers about hate crimes.

As the first woman to report from the Senate floor you paved the way for so many others of great talent that may otherwise never have been heard. It is, however, your dedication to chronicling the truth about the Holocaust because of your work as a court reporter at the Nuremberg Trials that has earned you a special place in modern history. As you know, my father Thomas Dodd, was one of the lead prosecutors at the Nuremberg Trials. He taught me at a very young age the danger of sitting idly by while innocent people suffer. In that same spirit, you have devoted your time to making almost two hundred presentations to more than 20,000 people to spread the truth about the Holocaust so that this profoundly dark time in the history of our world does not repeat itself. I thank you for the profound difference your crusading spirit has made.

By presenting your experiences to audiences across the United States, you have touched countless lives, and have explained in clear and powerful terms what can result when the world turns a blind eye to evil. Your impact on our society and on future generations is profound, and I believe there to be no more deserving recipient of the first NCRA Humanitarian Award than you.

You are likely among the few significant remaining repositories of the horrors of what may be humankind’s darkest ages, and all the citizens of this planet owe you a debt of gratitude for what you have done to not allow those horrors to be buried along with the victims. You are the reporting profession’s true shining star, not because you were able to record the proceedings of the Nazi doctors’ trials, but because you have taken on the responsibility to bring deep meaning to the words ‘never forget.’