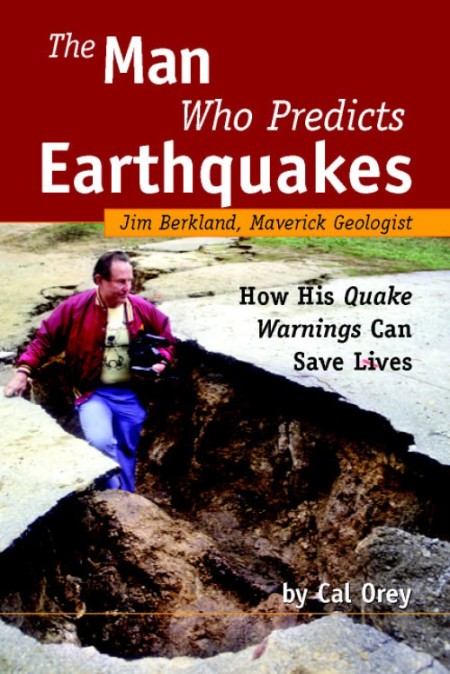 The Man Who Predicts Earthquakes

Jim Berkland, Maverick Geologist—How His Quake Warnings Can Save Lives

Meet Jim Berkland, the only American scientist to predict a major quake. He’s also accurately predicted at least 6 other quakes around the world based on tides, geyser activity, pets, and more.

Publication coincides with the 100th anniversary of the 1906 San Francisco earthquake and follows the largest earthquake/tsunami disaster of modern times.

Who is the only American scientist to predict and name a major quake? Meet Jim Berkland, a California geologist whose forecast of the famous October 17, 1989 “World Series Quake” that rumbled through the San Francisco Bay Area was right on the money. He’s also accurately predicted at least 6 other significant quakes around the world.

This is the first book to document a geologist’s uncanny ability to foretell earthquakes around the world. Many of his theories—based on tides, moons, geyser activity, disoriented pets, lost cats and dogs, and magnetic field changes—are linked to the great Indian Ocean quake—the tsunami disaster on December 26, 2004. Since scientists admit that they aren’t able to reliably predict earthquakes, is it far-fetched to monitor lost cats? Berkland doesn’t think so. Berkland hopes that “someday earthquake warnings will be announced along with the weather” and could save countless people’s lives around the world.

This fascinating read includes stories of earthquake survivors, a wealth of details about seismic activity in earthquake prone regions—West Coast, Midwest, the South, East Coast, China, Japan, among others—tales of earthquake cover-ups, and future weather as well as quake predictions. Written in a warm and witty style, full of cutting-edge advice about do-it-yourself quake warnings and earthquake preparedness, The Man Who Predicts Earthquakes is a timely and important book.

Cal Orey is the author of several books and hundreds of articles for magazines such as Woman’s World, Woman’s Day, and The Writer. She lives in South Lake Tahoe, California, near San Francisco.

Praise for The Man Who Predicts Earthquakes

Can Berkland predict earthquakes? It seems so, and veteran author Cal Orey does an extraordinary job of not only telling Jim's story to the world, but also providing readers with an enormous amount of valuable information about earthquakes. Frankly, I wish I had had this book when I was researching my own book about disasters. Highly recommended.

—Stephen Spignesi, author of Catastrophe! The 100 Greatest Disasters of All Time

In this landmark book, journalist Cal Orey demonstrates that Berkland will cross any chasm to deliver his quake wisdom.

A fascinating read full of amazing anecdotes and provocative information. Orey's book entertains while challenging conventional science. So be warned, once you start reading this book, you won't put it down.

Twenty to thirty percent of children in the area woke up more than a minute before the Kobe, Japan, earthquake in 1995. Cal Orey's book shows that a nature-loving geologist like Jim Berkland, with a heart of a child, can forecast earthquakes.