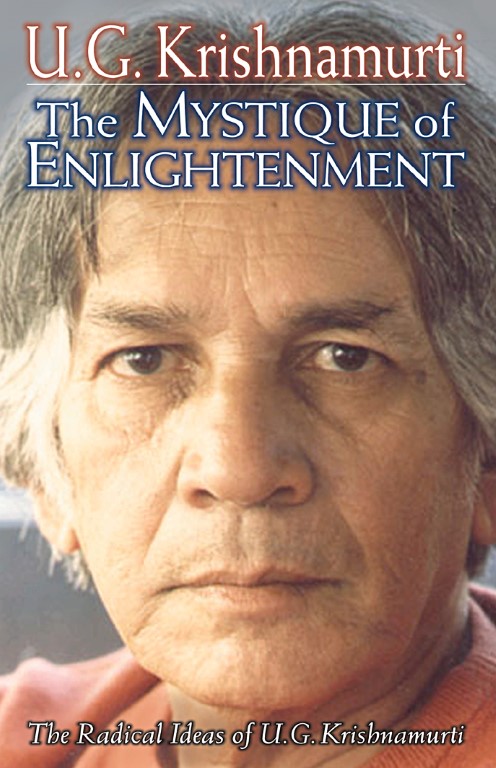 The Mystique of Enlightenment

The Radical Ideas of U.G. Krishnamurti

This book is a critique of contemporary spirituality. In a world in which spiritual techniques, teachers, and concepts are legion, U. G. stands nearly alone in his rejection of them all.

An underground spiritual classic now distributed widely for the first time in the U.S., this is the story of one of the most unusual figures in contemporary spirituality, U.G. Krishnamurti, in his own words. The Mystique of Enlightenment is a scathing critique of contemporary spirituality. In a world in which spiritual techniques, teachers, concepts, and organizations are legion, U. G. stands nearly alone in his rejection of it all: “I am only interested in describing this state, in clearing away the occultation and mystification in which those people in the ‘holy business’ have shrouded the whole thing. Maybe I can convince you not to waste a lot of time and energy looking for a state that does not exist except in your imagination… The natural state is acausal: it just happens.” The author does not equate the natural state with enlightenment, which he describes as an illusion created by our culture. He states emphatically that one can do nothing to attain the natural state. In fact, any movement towards it separates one from it.

U. G. Krishnamurti is an original voice, through which much of contemporary spirituality is expressed in a new way. For those interested in the full spectrum of modern spiritual thought, this is a must-read. In the well-known history of J. Krishnamurti, few names have been so strongly associated with his message as U. G. Krishnamurti, who shared a close but contentious relationship with him over many years. U.G. was raised to take on the mantle of guru, much like J. Krishnamurti. When the two men eventually met, each had rejected the guru role, and for years they conversed regularly, struggling to uncover the nature of truth, before a falling-out led each in a different direction.

It is fairly common in reading modern spiritual books to find references to U. G. Krishnamurti’s influence on both teachers and their students. His books have been translated into nearly every European language, as well as Chinese and Japanese. Widely regarded in India and Europe, The Mystique of Enlightenment is considered by U.G.’s closest associates to be the best summary of his ideas.

The book consists of transcripts of informal talks with those who come to ask him questions. In one of these talks, he relates his life story, including the events leading up to and comprising what he calls his “calamity,” or his entry into the natural state. Since his own experience of coming into the natural state at age 49, he has spent his time traveling throughout the world, staying with friends or in rented apartments for a few months at a time. He gives no public talks but meets with people who come to see him. What he offers is not hope or encouragement, but stark reality: “Of one thing I am certain. I cannot help you solve your basic dilemma or save you from self-deception, and if I can’t help you, no one can.” His message is simple: he has no message. Nevertheless, his words can inspire you to face your own assumptions and motivations to discover for yourself the truth.

Praise for The Mystique of Enlightenment

U. G. Krishnamurti claims that he cannot help us in our quest for enlightenment. Paradoxically, I find this refreshingly helpful. This work is an expression of U.G.’s exquisite mastery in penetrating the many illusions to be found on the spiritual path. I highly recommend it.

Is U.G. ‘free’? No more than you and I. His conditioning is as thorough as anybody’s—all events in nature exist in the chain of causes. But there is nobody there to experience either the desire for liberation, or the imagined freedom that is supposed to come after the cessation of desire. U.G. is neither free nor in bondage, because he is not. How about us? Our objective existence is no different from his. Our subjective sense of the self creates the concepts of freedom and bondage. We may think equally that we are free or in bondage. Like U.G., we are neither. Just events in nature.

—Jean-Michel Terdjman, author of The Useless Self

If any comparison makes sense, U.G. could be likened to a modern day cross between Socrates and Diogenes. However, he differs from the former because he undercuts the cornerstone of the Socratic method: discourse. U.G. isn’t out to convince, convert, win over or influence anyone; and he differs from the latter because nothing in his manner or bearing is provocative or outlandish. However, he is similar to Socrates in that he has a disarming and implacable logic, and akin to Diogenes because he shows no deference to money, power, position, or prestige. In a very real sense, U.G. is a unique witness to that elusive wisdom that has been the hallmark of every great mystic who has ever lived.
And like a mirror, he is a fascinating witness to our era as well.