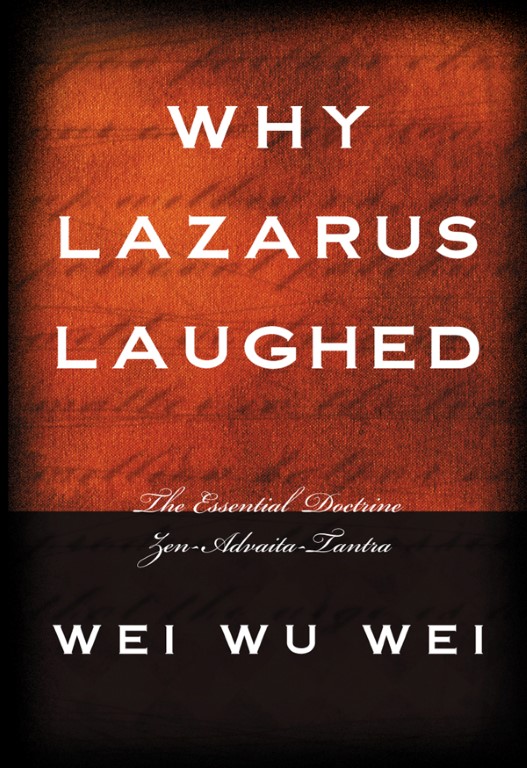 Why Lazarus Laughed explicates the doctrine shared by Zen Buddhism, Advaita, and Tantra. The author is not interested in these traditions as religions but only as they “reflect the moon” for us.

This is the second book written by Wei Wu Wei in a collection of what are now considered the spiritual classics of Zen Buddhism, Advaita, and Taoism. Why Lazarus Laughed is a powerfully written book of aphorisms, meditations, and startling ruminations on the nature of time, consciousness, freedom, enlightenment, duality, and free will.

Wei Wu Wei described his books as “reflections of the moon in a puddle” because he does not set himself apart from any other, does not profess to be a teacher, and does not claim to have the last word on spiritual truth. His modest assessment of how well he succeeds at his task would most certainly be disputed by his many enthusiastic readers: “Essential understanding might have found its way into occasional pages.” Indeed, profound insight seems to leap from every sentence.

“Play your part in the comedy, but don't identify yourself with your role!” says Wei Wu Wei, and he follows his own advice. He writes his works anonymously and uses his iconoclastic humor to drive home his points. Those who discover his books feel that they have found a secret teaching that brilliantly delivers the purest truth. He has become a sort of underground spiritual favorite, whose fans anxiously await each reissued book.

As the subtitle states, Why Lazarus Laughed explicates the essential doctrine shared by the traditions of Zen Buddhism, Advaita, and Tantra. The author is not interested in these traditions as religions, but only in so much as they “reflect the moon” for us. To read this jewel of a book from the immortal Wei Wu Wei is to enter into the heart and mind of one who possessed a very clear insight into the essence of understanding.